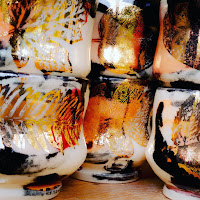 Four years ago, I had to give my carving arm a break. My wrist had swollen up into so many nasty knots that I could barely even grasp a carving tool, much less do any carving. Now, what was I going to do? Giving up ceramics wasn't on the horizon at all. I just had to think differently about how I was working and what I wanted to make.

Painterly work had always interested me, but I was never motivated enough to branch out from carving - until I had to. So, four years ago I began painting with glazes on white porcelain. For a little extra panache, I experimented with gold decals. Years later, I still make this work as a fun break from carving while adding a little colour into the mix.

The cups are the same English Grolleg porcelain I use for my carved ware. It's such a beautiful clay. I mix commercial stains into my clear glaze base and paint colourful abstractions onto bisque ware. A third firing is done with the 22K gold decals that are screen prints of my photographs of local flora and fauna.

All my work is available at the Hornby Island Farmers' Market during the summer months and sometimes at Weinberg's in Buckley Bay. 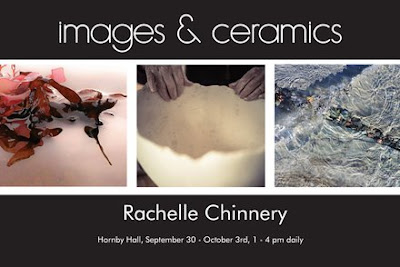 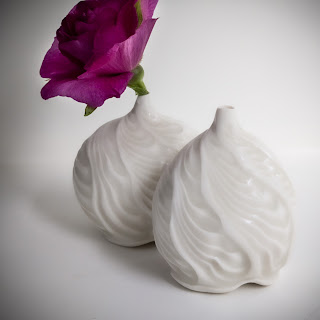